This jar (acc. no.: 22.2.33) is part of a set of four that the Met Museum bought in 1922. Because they were purchased there’s no record of where they were found but they are thought to date to the reign of Amenhotep III, because similar ones were found in the tomb of his in-laws.

Each jar has a different carving on the lid, a frog in this case and the others are an ibex, a calf or bull and the god Bes. They are clearly not canopic jars (wrong animals/deities, wrong shape) and because there are no inscriptions I don’t think it’s known what they were for.

The frog has a long history in Egyptian iconography, and a strong association with fertility, rebirth and large numbers. It is associated with Heket, the goddess of childbirth, as well as with the male members of the Ogdoad (central gods in one of the creation myths).

It’s a shame we don’t know more about these jars. Were they just a fleeting fashion in elite circles? Were the contents linked to the decoration? And many more questions!

See it on my photo site: https://photos.talesfromthetwolands.org/picture.php?/1118/category/6

I’ve talked about frogs before on the blog: https://talesfromthetwolands.org/2019/12/21/hundreds-of-thousands/

This is an apotropaic rod – it was used to ward off harmful spirits. It comes in four segments, which might be related to the “birthing bricks” used to protect women during childbirth. And it’s covered in protective motifs, particularly protective animals.

This is a Middle Kingdom object but the animals on the top remind me a lot of some Early Dynastic objects that are also in the Met. I don’t know if they had the same meaning or not – the earlier frog & crocodile were donated to temples, these are magic in a domestic setting.

I’ve written about frogs on the blog before: https://talesfromthetwolands.org/2019/12/21/hundreds-of-thousands/ 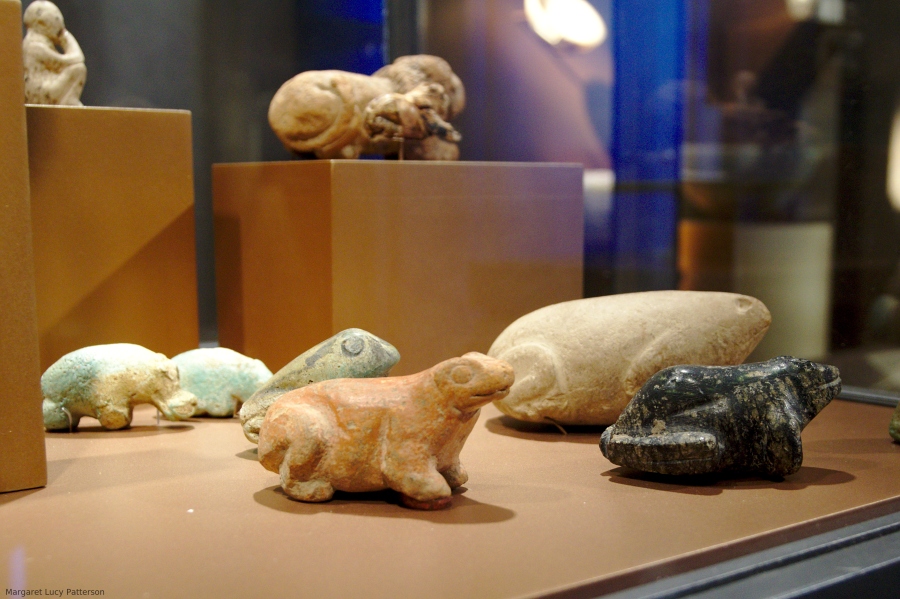 I remember one year when I was in primary school we collected frog spawn from some local pond and put it in a fish tank in the classroom so we could watch the tadpoles hatch. And I remember being a bit in awe of just how much there was – all that frog spawn and we’d only taken a little bit of it, and there were so many tadpoles in our fish tank! There were going to be so many frogs! Of course some years later I realised that most tadpoles would get eaten by fish long before they got to be adult frogs, but the point still stands. So it should be no surprise that the ancient Egyptians, who were a lot closer to nature than a city girl in the early 1980s, should have a similar association between frogs and fertility & rebirth. It’s even embedded in their writing system – there is a frog shaped hieroglyph (used as an ideograph for the phrase wekhem ankh “repeating life”) and a tadpole shaped hieroglyph which is used to write the number 100,000.

Frogs appear in Egyptian art & artifacts from Prehistoric Egypt right through into Christian times. In Predynastic times the most common frog shaped object is small stone jars – a suitable size and material to hold small amounts of a precious or volatile liquid. Some of these have been found in non-funerary contexts and have features (like handles suitable for hanging them up) that suggest they were used in life. Sadly none of the jars that have been discovered contained any residue that could be analysed. One always needs to be cautious about making assumptions about prehistoric Egypt based on known Pharaonic beliefs but even with such caveats Diana Craig Patch speculates (in “Dawn of Egyptian Art”) that these may’ve contained substances used during childbirth.

As I alluded to in the last paragraph in Pharaonic Egypt there’s an association of frogs with childbirth. The deity most associated with the frog is a goddess called Heket. She is venerated as the female counterpart of Khnum, and is sometimes shown as a frog-headed woman assisting him at his potters wheel while he forms the person & their ka. Heket first shows up in the Pyramid Texts, helping the deceased king on his way to the sky and his afterlife. By the Middle Kingdom she is associated with childbirth and in particular the final stages of labour – she features in the Middle Kingdom story about the founding of the 5th Dynasty assisting with the birth of the three kings that inaugurated the dynasty. Also in the Middle Kingdom midwives might’ve been referred to as “servants of Heket”. She’s shown on ivory wands from the Middle Kingdom as a frog, and frog shaped amulets are fairly common from the New Kingdom onward. They’re never as common as Bes or Taweret amulets, but even during the Amarna period they are still found in reasonable numbers.

Heket had some of her own temples and her main cult centre was at a place called Herwer (but it’s not known where that actually was). She also appears depicted in temples dedicated to other deities, for instance she shows up in Seti I’s temple at Abydos receiving an offering from the king himself. Due to her association with birth and fertility she becomes associated with the Osiris mythology, for instance there’s a relief in the Late Period temple at Hibis where she’s depicted as a frog overseeing the conception of Horus. Her cult survives through until at least the end of the Late Period, as she’s mentioned in the reliefs of the tomb of Petosiris at Tuna el-Gebel which dates to around 300 BCE.

Heket was not the only deity to be associated with the frog. There are also the four male deities of the Hermopolitan Ogdoad. The Ogdoad are the eight primordial gods that existed before the world was created in the Hermopolitan mythology. They were Huh and his consort Hauhet, Nun and his consort Naunet, Kuk and his consort Kauket and Amun and his consort Amaunet. At first they are depicted as human deities, but later in Egyptian history they are shown as pairs of frog (male) and snake (female) headed deities. As well as this the frog is sometimes depicted with the god Hapi as part of a symbol of fecundity – for instance at the temple at Philae. Frogs as a symbol of rebirth don’t even die out when Pharaonic Egyptian culture fades away – they make it into Coptic Christian iconography as a sign of the resurrection!

And the last bit of frog-related iconography to look out for is tadpoles sitting on shen rings, or associated with notched palm leaves or staves. The tadpole is here as the hieroglyph for 100,000 and the two or three symbols taken together express a wish for the king to reign or live for hundreds of thousands of eternities. I didn’t know about this till I was reading up on frogs for this article, and I wish I had – so many missed opportunities to look out for tadpoles in reliefs!