I enjoy the way that Egyptian furniture often has feet that are modelled after the feet of animals. This example is shaped like a bull’s hoof and is particularly finely carved from elephant ivory.

It was found at Umm el-Qab, a royal cemetery at Abdyos with burials of 1st Dynasty kings as well as some pre-dynastic tombs and two 2nd Dynasty tombs. Bulls are a symbol of the king’s power, and the beauty of this carving suggests to me that it was a piece of royal furniture.

It’s a reminder that even 5000 years ago at the beginning of a unified Egyptian state they were already a highly sophisticated society. The elites lived in luxury, surrounded by beautiful objects.

See it on my photo site: https://photos.talesfromthetwolands.org/picture.php?/1401 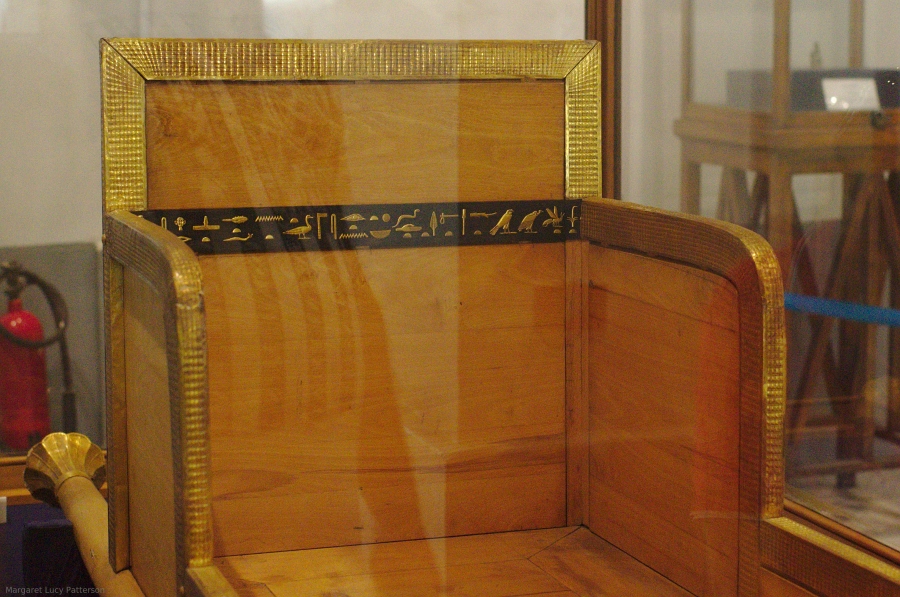 In a twist on the usual “donkey leg in a hole” mythology of tomb discovery the most intact elite burial of the 4th Dynasty was discovered when the leg of a photographer’s tripod broke through the seal at the top of the shaft. The photographer in question was Mohammedani Ibrahimi, who was working for George Reisner at Giza in 1925, and the tomb was that of Hetepheres, a queen of the early 4th Dynasty dating to around 2500 BCE. The tomb is a type of tomb known as a shaft tomb – a descriptive name meaning the entrance is a vertical shaft and the chambers are at the bottom (or off the sides) of this. In this case the shaft was completely full of limestone blocks for its entire 27 meter length. Partway down they discovered a small sealed side chamber with an ox head and some beer jars. Many tombs have reliefs with ox heads and beer jars as part of their offering scenes, and texts that refer to offerings of “bread, beer, oxen, birds, alabaster, clothing, and every good and pure thing upon which a god lives.”. This chamber was a literal manifestation of the same wish for Hetepheres to have all that she needed in the afterlife.

When the excavators reached the bottom of the shaft they could see that the south wall was made of limestone blocks rather than bedrock and behind this was a short corridor. At the end of the corridor another wall of limestone blocks. Just as Howard Carter had done at Tutankhamun’s tomb in 1922, they removed a block and peered through into a room that glistened with gold! And then promptly sealed it back up and Reisner spent 10 months planning the excavation that was to follow. Sadly the contents of the tomb weren’t in nearly as good condition as Tutankhamun’s were. Not only because the objects were some 1000 years older, but also there had been a water leak into the chamber which had hastened the deterioration of the wooden and other organic elements. As a result the gold leaf that had covered much of Hetepheres’s furniture was in fragments and no longer attached to what was left of its supports. It took Reisner and his team two years to meticulously clear this relatively small chamber (about 17 feet by 9 feet) to the point where they could reach the large alabaster sarcophagus that they could see from the very beginning.

The sarcophagus was intact and in an undisturbed tomb so expectations were high when it came time to open it. The reality was rather more … confusing. Inside there was nothing at all! But her organs were discovered sealed in an alabaster canopic chest tucked into a sealed niche in the tomb wall, so clearly her body had been mummified. Reisner came up with an explanation for the missing body, which John Romer rather delightfully refers to as an “Ali Baba-ry” of a tale. In this story Hetepheres is initially buried at Dahshur near her husband, but then her son decides she should be reburied at Giza. When his officials go to organise the moving of the tomb contents they discover the tomb has been looted and the body destroyed; no-one can quite bring themselves to tell the king that his mother is no longer in her tomb, so they reseal the sarcophagus and bury the empty box with full honours! More recently Mark Lehner has proposed a more sober explanation, with some similarities but a bit less farce. The idea again is that Hetepheres’s place of burial was upgraded some time after her death, but in this version she is initially buried in the tomb that Reisner excavated. She is then exhumed and reburied in one of the small pyramids near the Great Pyramid with fresh & more elaborate funerary goods. These are subsequently looted in antiquity and so all we have are the discarded original set.

So who was Hetepheres? Prior to the discovery of this tomb her name was completely unknown in the modern world. But from the inscriptions on objects in her tomb we can now glimpse her rather indistinctly through the fog of time. One part of her funerary assemblage, a frame for a large canopy, has the cartouches of the 4th Dynasty founder, Sneferu. Another part, a carrying chair, has the name of Sneferu’s successor who built the Great Pyramid at Giza – Khufu. Khufu’s name is also on the sealings of items found in the tomb, so Khufu’s bureaucracy was involved in the provisioning of Hetepheres’s tomb. This gives us a good idea of when she lived and a good idea of her status, both of which are backed up by the proximity of this tomb to the Great Pyramid and by the high quality precious items discovered inside.

The titles she bore give us some more clues. One of these was “Mother of the Dual King”. Of the two kings named in her funerary assemblage it seems most plausible that she was Khufu’s mother – she died during his reign and this tomb is found in close proximity to his tomb. The other title that gives us relationship information is “God’s Daughter of His Body” – the god in question is the king, and “of his body” indicates a biological rather than honorific relationship. Her father is rather unlikely to be the other named king in her tomb – that would require an extra generation between Sneferu and Khufu that there’s no other evidence of. So it’s most plausible that Sneferu was her husband and his predecessor Huni was her father.

Hetepheres had other titles which reflect her high status in Egyptian society like “guide of the ruler” and “favourite lady whose every word is done for her”. I’m using John Romer’s translations here – none of the books went for what I thought was the obvious joke/reference: “She Who Must Be Obeyed”! If you take these literally it implies that Khufu did what his mother told him to do, but I’m inclined to go with those who see them as an indication of status and power but not necessarily literally able to order the king about.

Her funerary goods also give some indication of what that high status meant in terms of material wealth in her society. She was buried with the usual assortment of provisions for the afterlife. As well as jars and boxes she had some large items of furniture including a bed and a frame for a canopy to surround it. These were painstakingly restored from the pieces of gold leaf and wood remnants by Hag Ahmed Youssef Mustafa (who later restored one of Khufu’s solar boats) and are now in the Cairo Museum. Even if these specific items were ceremonial & funerary rather than her everyday furniture they give us an impression of a magnificent and opulent court – being able to bury that much gold is a sign of great wealth, after all. The design is lightweight and portable – the bed and canopy can be disassembled and reassembled easily. This fits with other evidence that indicates that the Egyptian court was peripatetic: more like a medieval English king than the fixed seats of government that we have today.

As so often in ancient history we have this tension between feeling like we know about someone but not really knowing anything for sure. Hetepheres’s tomb reinforces our view of Old Kingdom Egypt as a culture with a conspicuously wealthy elite moving around the country looking practically god-like in comparison to the average person. And it gives us a flavour of a society where a woman could hold high status and perhaps wield great power but was nonetheless defined primarily by her relationships to men. But we still know nothing certain about the woman herself beyond the fact of her existence.