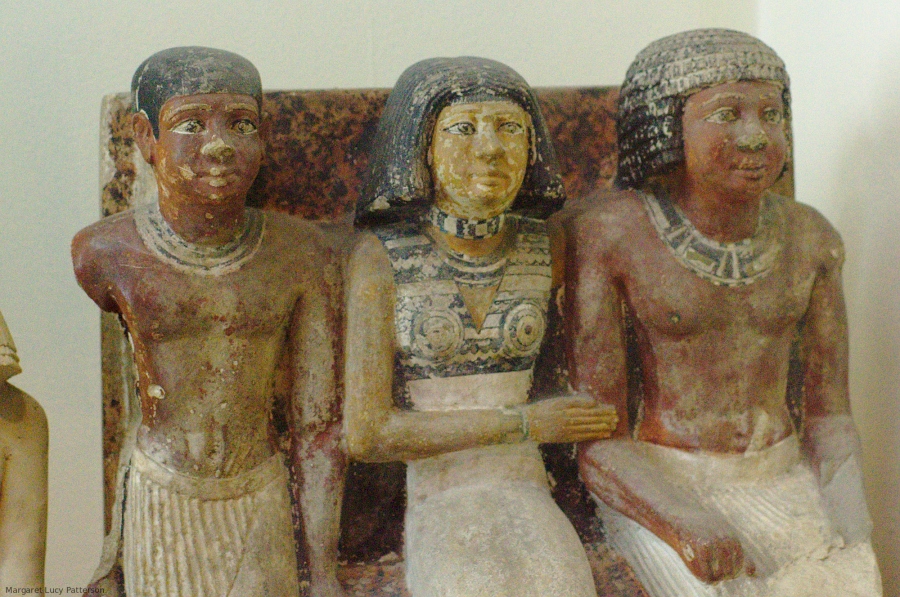 I don’t actually know very much about this statue. It was in the Cairo Museum but unlabelled when I took the photo in 2016. Judging by the other items around it in the museum, and the way it looks, I’m guessing that it’s an Old Kingdom statue of a family group.

It’s suffered from the depredations of time, there’s an arm missing off both the two chaps where clearly it’s been bashed about at some point, and the paint is chipped and rubbing off. But despite that you can still see that this was once a pretty nice statue.

The three individuals have been represented as prosperous and well off. They’re dressed in fine white linen, carefully pleated for the men’s kilts and a close fitting sheath dress for the woman. They also all wear jewellery and look like they are healthy and well fed.

I particularly like all the detail on the woman’s dress and accessories. The dress, necklaces and bracelet clearly make a cohesive outfit, and I wonder if this was something she would’ve worn in life or an idealised outfit designed for eternity.

As I said, it’s in the Cairo Museum or at least it was in 2016, but I’ve no idea where it came from, when it was made, nor the accession number. If anyone has more information then do let me know! 🙂️

See it on my photo site: https://photos.talesfromthetwolands.org/picture.php?/508/category/4 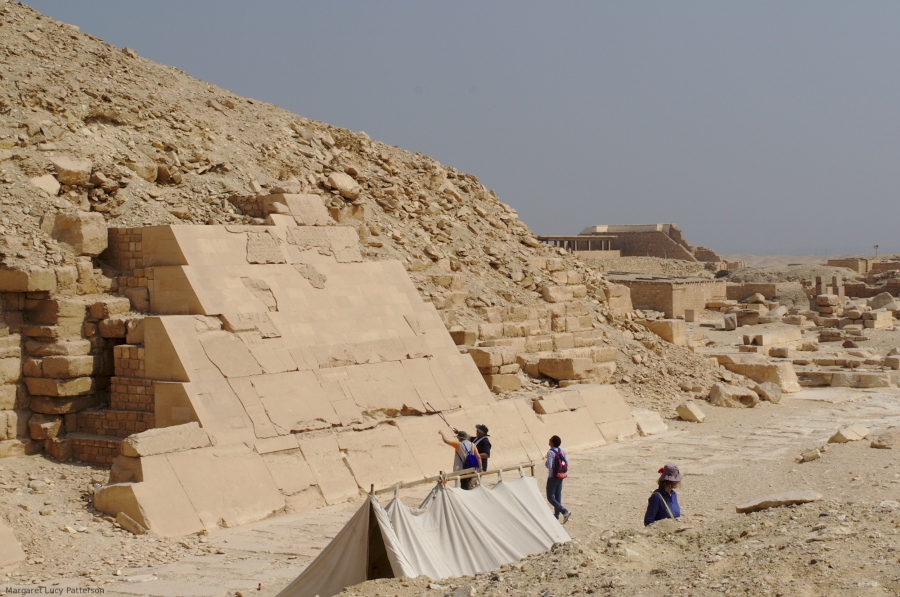 Ancient Egyptian history didn’t just happen an awfully long time ago, but their civilisation also lasted an almost unimaginable length of time. It’s often noted that Cleopatra is closer to our time than she was to the time of the builders of the pyramids at Giza.

And the Egyptians knew it. They didn’t have tales of giants building the ancient monuments, they didn’t think it was some vanished race of superhumans, they knew that this was their ancestors constructing these buildings in the same way that their own king commissioned his own.

This is one of the ways that we know this – the vaguely pyramid shaped heap of stone on the left of the picture is the pyramid built by Unas, who ruled around 2350 BCE as the last king of the 5th Dynasty during the Old Kingdom.

And the cleaner looking slabs laid up against it are a (reconstructed) inscription commissioned by a man called Khaemwaset (who was one of the many, many sons of Ramesses II) around 1250 BCE during the 19th Dynasty in the New Kingdom.

The inscription talks about how he found that the pyramid was in ruin, so restored it and made sure that Unas’s name was on it once more. This ruined pyramid wasn’t just a heap of rubble to him, but was known to be the tomb of a specific king some 1200 years after it was built.

See it on my photo site: https://photos.talesfromthetwolands.org/picture.php?/713/category/5 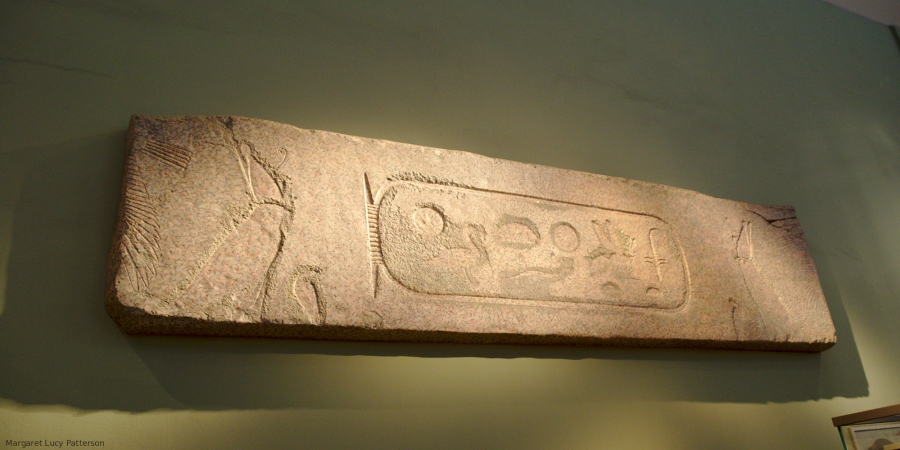 This is a modern cast of an architectural element probably from the court of the Pyramid Temple at Khafre’s pyramid at Giza, which was subsequently re-used in the pyramid of Amenemhat I some 500 years later and was so deeply embedded in that structure that it can’t be removed.

The inscription on it is damaged in an interesting way – someone has carefully chiselled little lines around the outline of most of the hieroglyphs and motifs on the block. But not in such as way as to obscure them, everything is still legible.

The Met Museum’s website has quite a long discussion of the piece in its curatorial interpretation – they think the damage may indicate that it was reused more than once, perhaps originally by Khafre moving it from the building it was originally in.

The reuse by Amenemhat I was probably partly for pragmatic reasons (why quarry another huge piece of stone if you can just re-use an old one), but it also probably had more symbolism than that – it would link Amenemhat I and his tomb to the great old kings of the Old Kingdom.

See it on my photo site: https://photos.talesfromthetwolands.org/picture.php?/1371/category/6 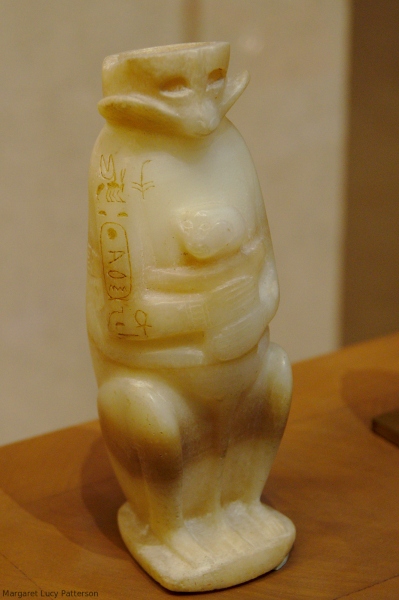 This delightful little piece is only 7.5 inches tall and is inscribed with the name of Merenre I who ruled immediately before the better known Pepi II towards the end of the 6th Dynasty. This makes it over 4000 years old, and despite being that old it’s still in pretty good nick!

It’s made of alabaster and shows a mother monkey cuddling her baby. It’s thought to’ve been a vessel which once held oil or unguents, and may’ve been gifted to a woman of the court by the king. The imagery has connotations of the exotic and of fertility.

It also makes me think a bit of the small alabaster statue of Pepi II on his mother’s knee that’s in the Brooklyn Museum now, but I rather think no Ancient Egyptian would make that link!

I’ve talked about Pepi II on the blog before: https://talesfromthetwolands.org/2020/05/11/pepi-ii/ 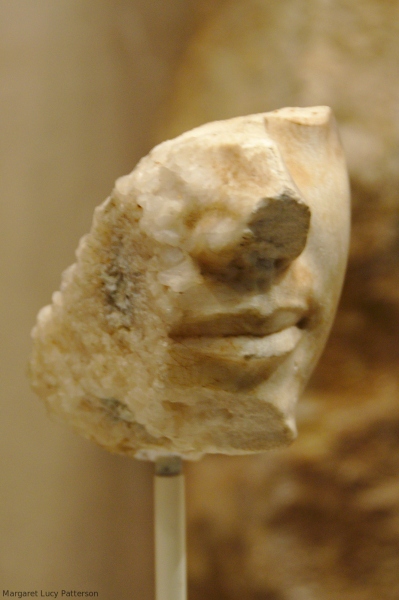 There’s something fascinating about damaged and fragmentary statue faces, and I frequently find myself photographing them in museums. They evoke the same feeling as Shelley’s Ozymandias, and I find the look of faded grandeur in the resulting photos compelling.

This face depicts Khafre, the fourth king of the 4th Dynasty and builder of the second biggest pyramid at Giza (put on a higher foundation than Khufu’s so that it would look bigger!). It was probably found in his pyramid complex (it’s now in the Met Museum, acc. no.: 26.7.1392),

It’s made of Egyptian alabaster (aka travertine, aka calcite). I particularly like the juxtaposition between the smooth, almost soft-looking, finished surfaces and the rough stone where it has broken apart. It must’ve been beautiful when originally made.

See it on my photo site: https://photos.talesfromthetwolands.org/picture.php?/1362/category/6 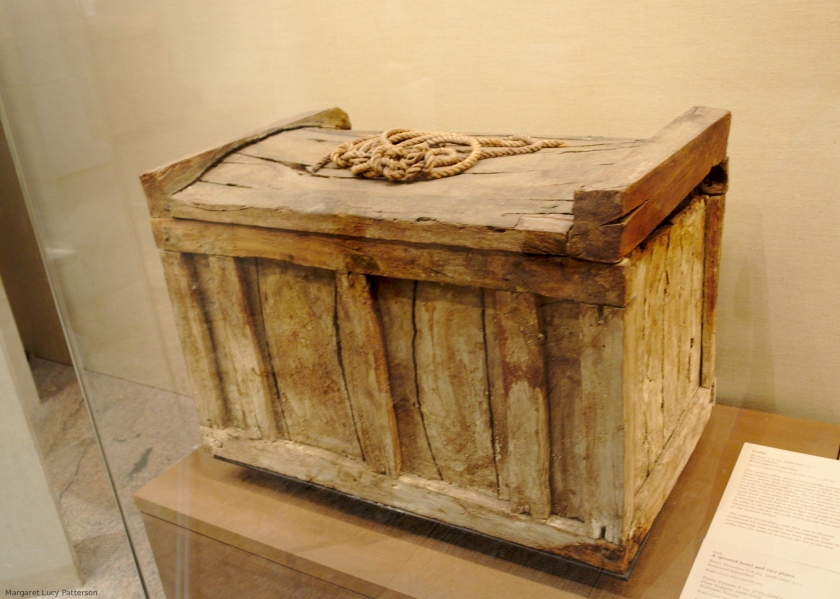 The words “ancient Egyptian coffin” conjure up images of gold, of intricate decoration & texts, and of human shaped boxes. But this was not always the case, and earlier coffins (like this one which dates to the early Old Kingdom) can be quite a bit less ostentatious & elaborate.

To start with it’s shorter than you might expect – this is because in this period (c. 2500 BCE) people weren’t laid out straight for burial. Instead they were placed in their graves curled up in a contracted position that’s sometimes referred to as the foetal position.

But don’t mistake it for a cheap or shoddy piece of work. Decent wood wasn’t plentiful in ancient Egypt, so a wooden coffin is demonstrating that you can bury a certain amount of wealth. Even given it was local Egyptian tamerisk wood I imagine it would still make a statement.

It’s also shaped to convey meaning. The long sides mimic the palace facade motif, which is part of the king’s iconography and is also used in the funerary context by more than just the king. The lid is vaulted and this is the shape of the shrine associated with Lower Egypt.

See it on my photo site: https://photos.talesfromthetwolands.org/picture.php?/1370/ 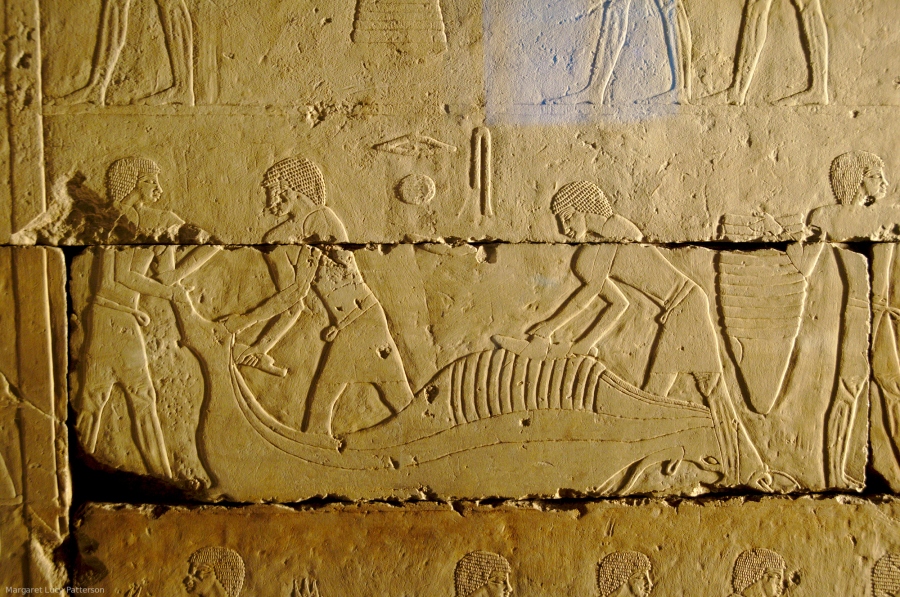 This is one of several scenes of butchering that are present on the walls of a tomb chapel that originally stood in Saqqara and dates to the 5th Dynasty in the Old Kingdom (around 4500 years ago). The whole chapel is now in the Met Museum (acc. no.:08.201.1).

Butchering scenes were common in these chapels to provide meat for the deceased person in the afterlife. This one is on the west wall of the chapel, near the false door where offerings to the deceased were placed. So its likely function is to provide offerings in perpetuity.

Despite being a common scene type this example is still unusual. The museum website points out that it’s a stage in the process not normally represented – the cow is part butchered and its ribs are exposed now that the first cuts have been removed.

See it on my photo site: https://photos.talesfromthetwolands.org/picture.php?/1377/ And there are several other scenes from the walls to the right and left (11 in total). 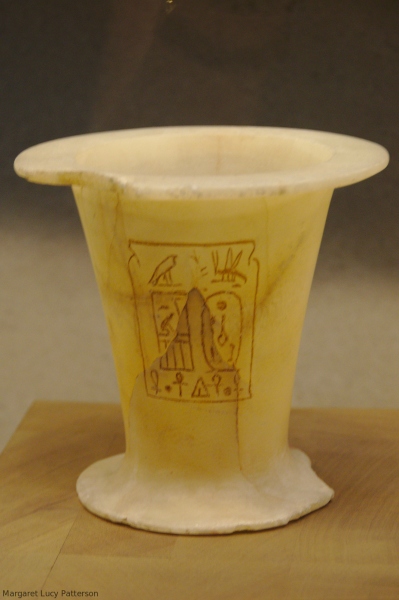 This alabaster jar is well over 4000 years old, dating to the reign of Pepi II at the end of the Old Kingdom. It’s about 5½ inches tall, and presumably once held some sort of unguent or ointment or other cosmetic. It no longer has a lid, but probably did when new.

It’s a beautiful piece of work, I am always a fan of these sorts of vessels with the juxtaposition between the creamy alabaster and the neatly incised and coloured text. And although it’s showing signs of its age, you can still imagine how lovely it would’ve been when brand new.

The text gives us two of the names of the king – on the left his Horus name in its serekh (Netjerikhau), and on the right his throne name in a cartouche (Neferkare). Below the names “given life like Re” runs in both directions sharing an initial hieroglyph.

The rulers of Egypt appear to’ve shared my liking for these sorts of pieces – for instance a thousand years later Tutankhamun was buried with many alabaster vessels, several labelled with his names. They probably took them rather more for granted as a piece of everyday life!

See this on my photo site: https://photos.talesfromthetwolands.org/picture.php?/1329/

I’ve talked about the naming of kings on the blog before: https://talesfromthetwolands.org/2019/08/11/the-naming-of-kings/ 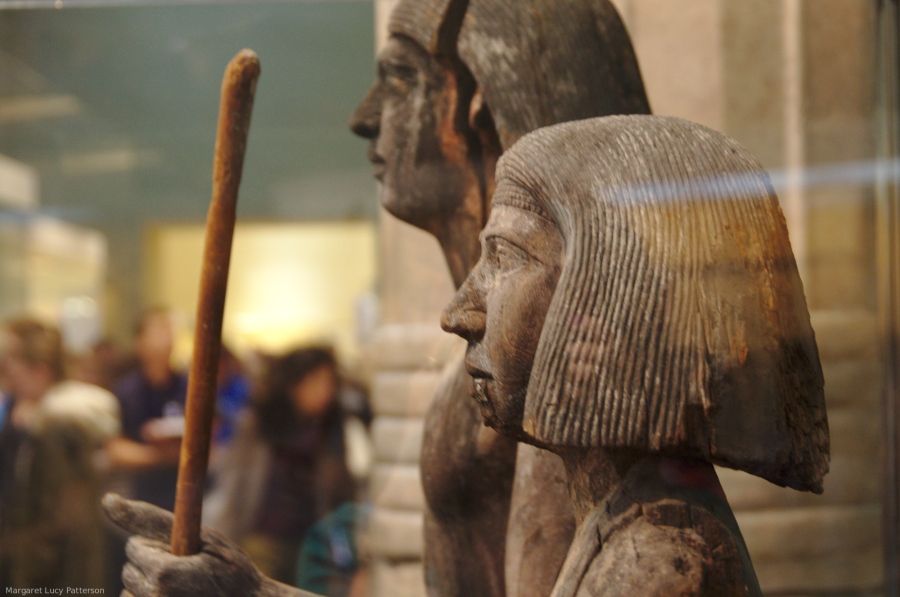 There were eleven wooden statues found in the tomb of Merti at Saqqara, who lived during the 5th Dynasty (over 4000 years ago) and was a high official and provincial governor. These two are Merti (back) and his wife (foreground).

I say “his wife” coz that’s what the museum label says, but she has no inscription so it’s really shorthand for “a woman associated with Merti perhaps his wife, perhaps his mother”. A reminder that the limited space of a museum label can make it sound more definitive than it is!

The statues are made of acacia wood, and would once have been painted. I’m always astonished that wooden objects like this have survived so long. They’re still beautiful too, and display a great attention to detail. Once they must’ve been spectacular.

See it on my photo site: https://photos.talesfromthetwolands.org/picture.php?/1335/ and go left for two more views of this pair of statues. 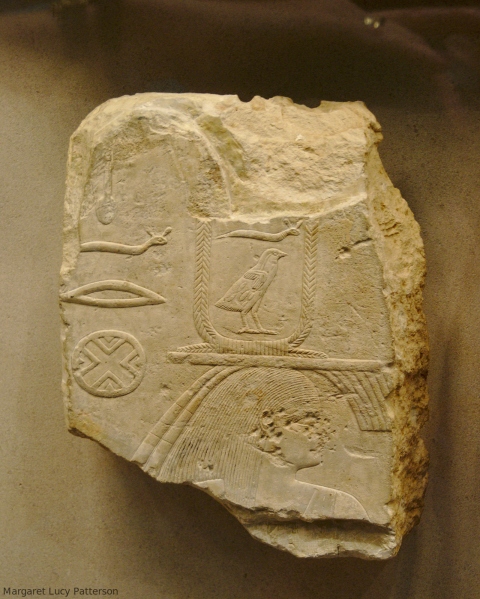 This happened a lot throughout Ancient Egyptian history and beyond – why go to the trouble of quarrying new blocks of stone and carefully shaping them when you could just nick some from a monument of a long dead king and flip them round to carve on what had been the back side.

The female figure on this is the personification of an estate which was endowed by Khufu to supply offerings to his funerary cult in perpetuity – the text and cartouche above her head give the name of this estate: Perfect is Khufu. Khufu was not modest! 😉

See it on my photo site: https://photos.talesfromthetwolands.org/picture.php?/1361/